15 Julia Child Quotes To Keep You In Love With Cooking 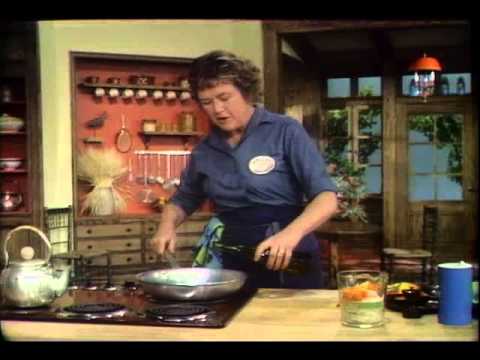 Ah, Julia Child. A marvellous woman with a passion and efficiency for cooking to be admired. I don?t think I?d eat half the things she cooked, but that?s besides the point

I was introduced to her show, The French Chef, rather late compared to other people. It was while visiting my parents, and as they have a rare and coveted thing known as satellite TV, I was lost among the thousands of choices of channels.

Then, my mom told me to put on her show. And I watched. And it was the weirdest thing I?d ever seen.

Over fifty years later, some of the recipes really didn?t hold up. The first episode I saw was holiday themed, and Julia was making a yule log with nasty little meringue mushrooms. But it didn?t matter what it was she was cooking. What mattered was how she was doing it.

Perhaps I was too used to the crisp, clean, highly processed food videos that we take for granted these days. I kept waiting for close-ups and texture shots that never came. I kept expecting crisp editorial moves, for things to mysteriously complete themselves or plates to be magically arranged in an artful manner.

Instead, I saw a person who reminded me of all my favourite weird aunts combined, making a bit of a mess. And I learned a ton.

Scroll down to the end of this post for a video link to one of my favourite episodes of The French Chef!

So I went to the library and borrowed a copy of Mastering the Art of French Cooking Volume Two (the first one was already checked out), and I started trying to figure out how I could apply anything from this inspiring person?s repertoire into my own cooking, which featured significantly less meat, butter, and cream.

This has proven, and continues to prove, to be a very big challenge. Though I love French cooking, it takes a lot of gentle but firm substitutions to try and make it vegan-friendly. So instead, I took away some more general lessons from Julia that could apply no matter what the cuisine ? and they inspire me in projects outside of the kitchen, too.

1. A cookbook is only as good as its poorest recipe.

2. Find something you?re passionate about and keep tremendously interested in it.

3. I discovered that when one follows the artist’s eye one sees unexpected treasures in so many seemingly ordinary scenes.

4. Remember a souffl? will wait for you, you can get it ready two hours ahead, hold it, bake it about forty minutes before you serve it. The important thing is to time it so that neither one of you collapses.

5. I?m going to put some light cream in ? or you can put some warm milk, if you?re on one of those hideous diets.

6. Try new recipes, learn from your mistakes, be fearless, and above all have fun!

7. Cooking is one failure after another, and that?s how you finally learn.

8. A party without a cake is just a meeting.

9. The only real stumbling block is fear of failure.

10. People who love to eat are always the best people.

11. Life itself is the proper binge.

12. To be a good cook you have to have a love of the good, a love of hard work, and a love of creating.

14. If you don?t pick your audience, you?re lost because you?re not really talking to anybody.

15. An old wine is like an old lady, and travelling can disturb her.

If you share my love of Julia and her weird, wonderful ways, you can click through here to check out some of my favourite works. These are affiliate links, so I do get some kickbacks if you decide to purchase them, but it doesn?t affect the price or anything.

This is the essential Julia Childs book, though she wrote it with two other women, whose names (Louisette Bertholle and Simone Beck) are shrunk down on the front cover. This thing is like a textbook or encyclopedia for all things cooking, with an obvious French flair. There?s a volume two, if for some reason this one alone doesn?t exhaust you!

A 3 disc box set with 18 episodes of this fantastic show! Marvel in the early production values and easygoing editing. Episodes are about 30 minutes long and are a real time capsule in the history of food media. Not to mention, you can actually learn a lot from watching and pick up a lot of technique.

I just finished reading this one myself, and it was great. It?s a lot more condensed than The Art of Cooking, so if that mighty tome intimidates you, consider going for this briefer book. But don?t get me wrong ? it?s packed full of enough recipes, technical skills, and stylistic guides to make you feel like Julia herself was hovering over you in the kitchen, ready to smack you away from the mousse with a purple ladle.

And last but certainly not least, please enjoy this episode of The French Chef on youtube ? not hosted by me, but simply a great way to watch! This episode is called ?Cheese Souffle?, and it takes a lot of mystery out of this notorious dish. It?s vegetarian, if you?re interested in making it!