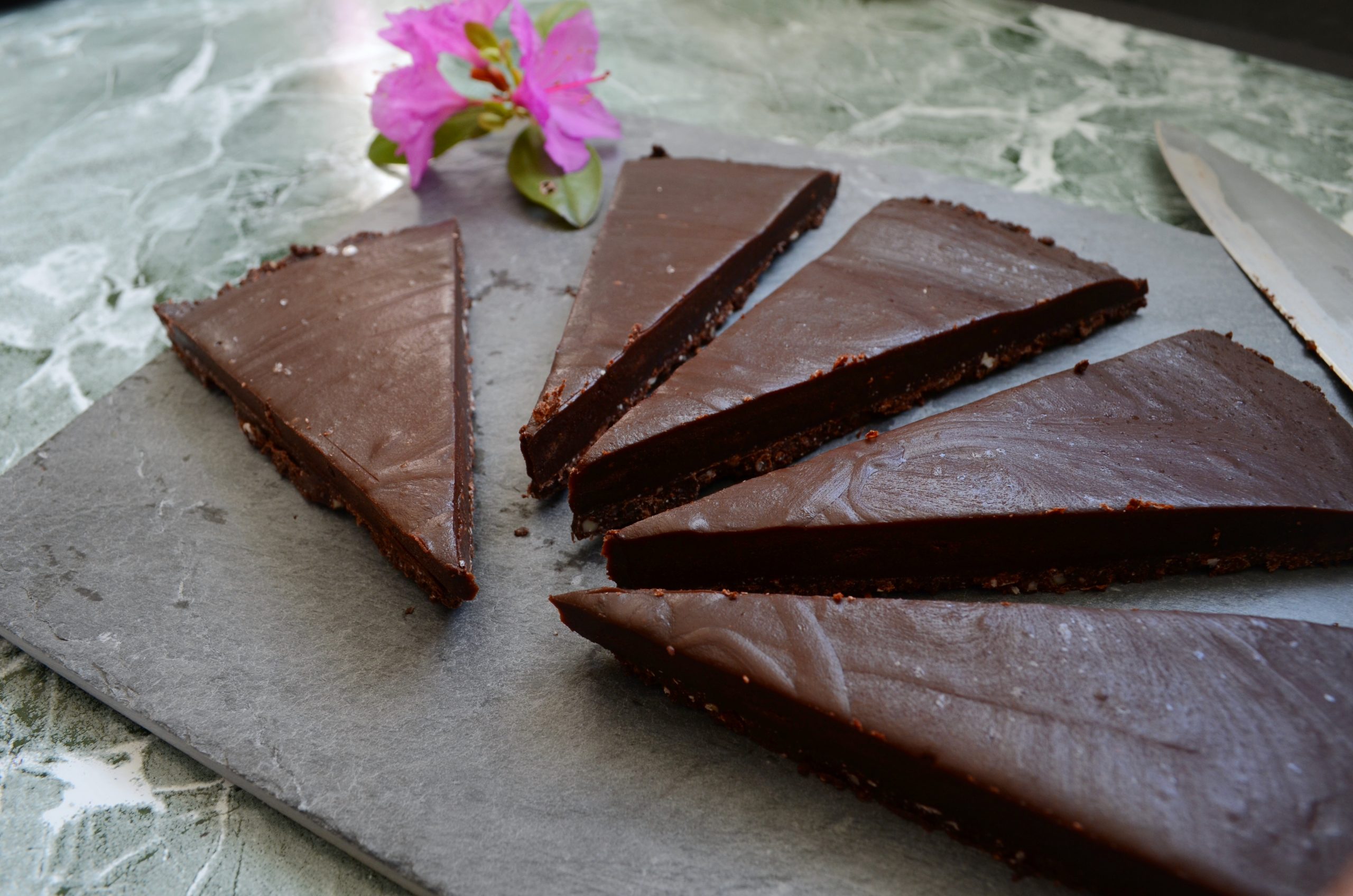 This rich and chocolate-filled tart looks good enough to have come from a fancy bakery, but really only takes a few choice ingredients and some time in the freezer!It’s vegan, gluten free, and absolutely delicious.

If you don’t believe me, well, the fact that I ate nearly half this tart by myself at a dinner party speaks for itself. And there were two cakes also on the table! They went ignored in favour of the thing I made myself (which is kind of tacky, maybe? Oh well).

My problem with typical non-vegan desserts like this is that I’m super apprehensive about what’s in them. Is it filled with egg yolks? Is the filling secretly just straight up butter with some cocoa powder thrown in for colour? Yeah, those sorts of things gross me out. Sorry, foodies. I’m sticking with this recipe instead.

The crust is less sweet than the filling, but still would probably be delightful on its own. The almonds and the couple of dates and splash of maple syrup all add dimensional sweetness that really can’t be beat. The coconut oil is what holds the whole thing together, so don’t skimp out on it.

A word on coconut: I know that some people are wary of it because it’s high in saturated fat. Saturated fat is the “bad” kind of fat, and will elevate your LDL cholesterol. However, coconut also does contain unsaturated fats, the “good” kind that raises your HDL cholesterol.

My opinion is that if you’re eating a diet that is relatively low or free of saturated fats otherwise (which, if you’re vegan, is possibly the case since you don’t eat animal fat or butter), then coconut isn’t going to be a problem. Moderation in all things, of course, but that’s where I come down in the debate. In the same way that a buttery pastry or tart would be an occasional treat for a non-vegan, so too should a coconut tart be an occasional treat for a vegan.

And if you’re not vegan and still want to eat this (and you should), then the same basic principle applies.

So! Now that I’ve lectured you on nutrition and fats, let’s talk about how good this tart is again. It’s outstanding. I sliced several wedges of it and stored them in a container in the freezer for easy sneaking. So far I’ve only dipped in once, but it’s still early in the week.

If you want to leave out the half cup of sugar in the filling, you totally can. It will just make the tart more bittersweet overall. You might ask, what’s the point of using dark chocolate and then just adding sugar? Well, dark chocolate is usually vegan. That’s literally it. The added sugar also adds somewhat to the density of the filling, but I think it will be fine without it, if necessary.

With this specific formulation, I think that this tastes exactly like a solid version of the butter-based hot fudge sauce that my mom makes. I honestly do not taste the coconut at all, but other people who tried it said they did, loud and clear. So perhaps my taste buds aren’t up to the task – but you can decide for yourself.