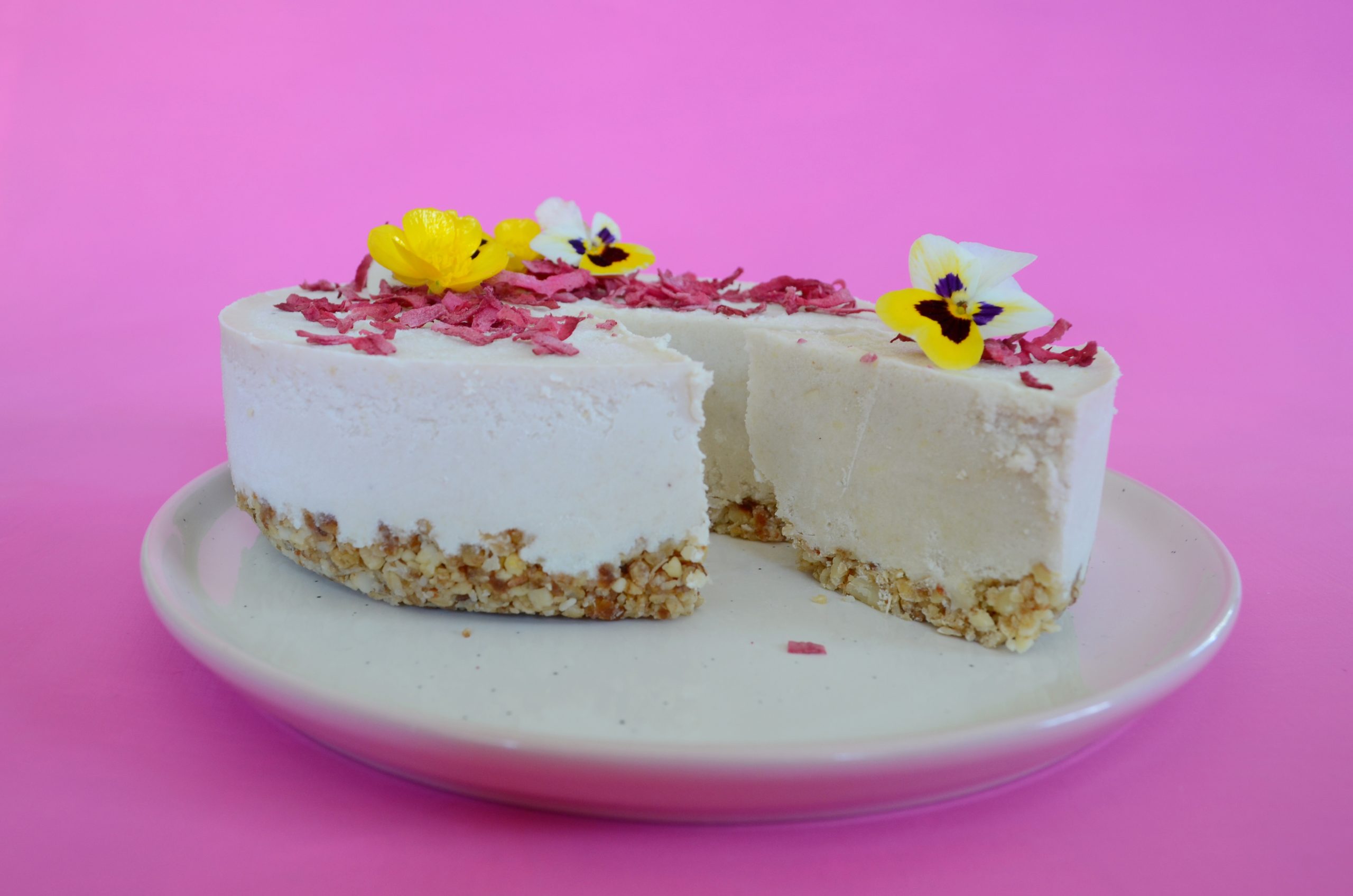 Want to make something gorgeous to really impress your plant-loving friends? This vegan cheesecake is rich and creamy, with tons of flavour and visual appeal. It can keep for ages in the freezer, too, so there’s no excuse not to whip one up and save it for your next gathering!

I’ve tried the frozen vegan cheesecake that Daiya makes, but I wasn’t overwhelmed by it. I figured I could do better, and customize it to my taste. There’s no refined sugar in this recipe, but rather the sweetness comes from?maple syrup, from?dates, and from?coconut. How nice!

And on that note, make sure to use pure and real maple syrup. The artificial stuff will technically work, but it’s made with refined sugar and doesn’t contain the interesting minerals and vitamins like calcium, magnesium, and potassium. (But, you know, it’s still sugar. So don’t go adding it to your diet for its health benefits!)

If you can’t eat gluten,

you’ll be able to enjoy this recipe so long as you aren’t sensitive to oats. I know they offer specifically “gluten-free” oats in the grocery store, but I have heard some people say that oats bother them too.

Not to fear! I recommend swapping out the oats for almond flour. It’ll still taste delicious, and be quite similar to the crust on my dark chocolate tart recipe. This just doesn’t include the cocoa powder.

If you can’t eat nuts,

specifically almonds, then you could switch out the almonds in the crust for another nut like pecans, or increase the amount of cashews. Unfortunately the filling just wouldn’t be the same without cashews, so if you aren’t able to eat those, I’d try a different recipe instead.

Before you want to make this recipe,

you’ll have to remember to put a can of coconut milk in the fridge and a bunch of cashews in a container with water to soak overnight (if possible).

Cooling the coconut milk will make all the cream separate and gather at the top of the can. You can easily scoop it out and leave behind the watery liquid. The cream is great for all sorts of desserts, and the liquid is good for adding to smoothies, curries, or whatever else you’re making.

Cashews become super soft from soaking, and turn into a creamy smooth paste with just a little brisk processing. If you don’t soak them, you’re not going to get them ground down as finely. Even just 4-5 hours of soaking will make a big difference.

And of course, I always use raw nuts because they don’t have any added salt and incorporate better when processing.

For the Coconut Topping

Start with the crust: